It’s quite magical and mysterious, taking a photograph without having someone behind the camera. When paired with a tripod, you can shoot your own portraits using the camera’s self timer, a cable release, shooting tethered to a computer or other device, or my new favorite and most modern approach- shooting with a wireless remote. 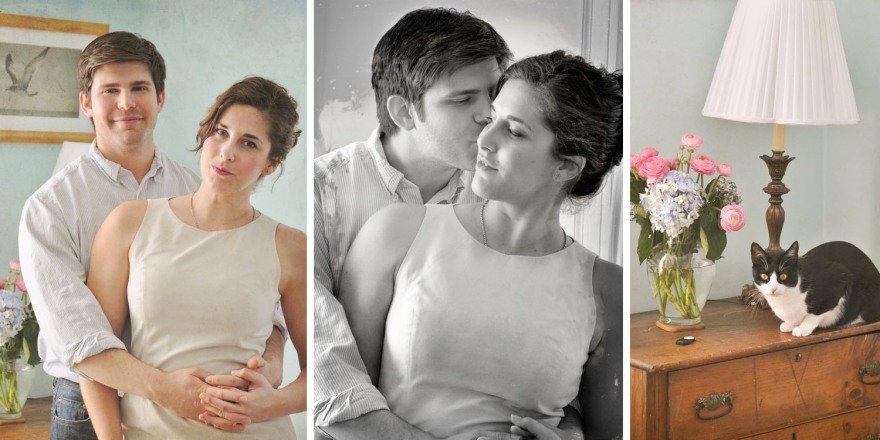 There’s no time to make your newly anointed fiancee partake in photos then post engagement celebrations. We’re both terribly awkward in front of the lens and would be even more so with an actual photographer, so we flew solo, just the two of us and a tripod, my trusty Nikon D90, and my new wireless remote (10$ from Amazon Basics). Oh wait, there was also the ever present Marshall.

I must admit, I was at first skeptical of my wireless remote when it was given to me as a Christmas present, assuming that it would be complicated and not compatible with my camera. However, using it couldn’t have been easier. It works with many DSLRs and only requires you change your shooting mode to ‘remote‘ which you do the same way as when you change your camera to a ‘self timer’ mode. The only slightly meddlesome part that must be creatively resolved is disguising the actual remote in your hand. It’s a small device, but if obscured too much, won’t trigger the shutter. My personal cheat and compromise was to simply crop out my hand.

Despite that, I still feel the wireless remote is far superior than a self timer being that there’s no running to and fro between the camera and scene. A necessity to the idea of shooting your own portrait is to shoot many, many frames, since you’re basically crossing your fingers and playing a numbers game. With the remote, you can click rapidly and not have to reset the timer. However, I still recommend taking a break to review your photos every 15 frames or so. The good news about all the bad frames is that at least there’s no third party to witness them!